We find ourselves in different situations on a daily basis, because that’s what life is made of. Our response to various areas of life is widely influenced by our childhood, our environment and relationships with people we interact with. Our personality is multifaceted and it should be. But what happens when our multifaceted personality become strong coping mechanisms in life,most often unconsciously developed over time?

Multiple Personality Disorder is a rare condition in which two or more personalities alternately take control of a person. Religion explains this as possession, spirituality calls it out of body experience and Psychiatry later renamed MPD as Dissociative Identity Disorder (DID) to reflect a better understanding of the condition. If you found this queer, then may I spark your curiosity by talking about two major cases of DID in the history of Psychiatry? 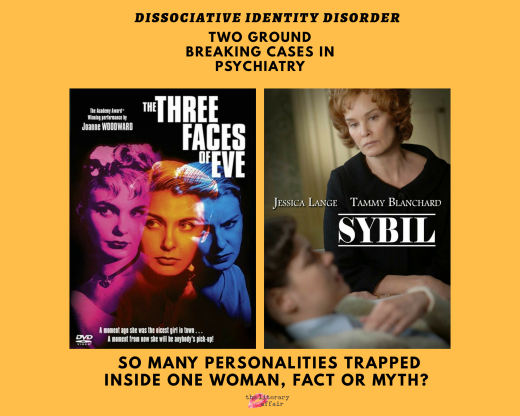 The cases of these two women were so unbelievable that they became famous enough to inspire books and movies. Chris Costner Sizemore was diagnosed with DID in the 1950s when mental health disorders were stigmatized so severely that she retreated from publicity. The psychiatrists who treated her, Corbett H. Thigpen and Hervey M. Cleckley wrote ‘The Three Faces of Eve,’ which was then made into a movie. It is a naive representation of the disorder but still an influential moment that brought to light to the public what Dissociative Identity Disorder actually is. The movie portrays an anguished Southern wife who keeps alternating between three very distinct personalities that seem to make an appearance leaving no memory except excruciating headaches. The movie ends with one of them surviving, in fact the best in her opinion, giving her the happy ending she wanted. Joanne Woodward won an Oscar for her performance in this movie. In reality the patient on whom the story is based had to suffer from a fragmented identity of not three but twenty personalities for several years until they were unified.

“You don’t know how wonderful it is to go to bed at night and know that it will be you that wakes up the next day,” Mrs. Sizemore said in an interview in The New York Post in 1975.

After getting cured, she went on to live a fairly healthy life advocating for mental health and was also a figurative painter until she died at the age of 89.

Sybil in 1973 was a book that sold millions of copies was supposedly based on a true story of Shirley Mason a girl with sixteen unique personalities. Mentally disturbed Shirley was treated by psychiatrist Connie Wilbur who took a special interest in Multiple Personality Disorder. As Shirley began to reveal several personalities Dr. Wilbur teamed up with Flora Rheta Schreiber to write the book Sybil. Later, Mason tried to confess to Dr. Wilbur that none of the personalities existed and that she made them all up which we do not know was true or just a way to escape the stigma. The book was a raging success and was made into a television movie in which Sybil comes to Dr. Wilbur complaining of blackouts after which she could not remember where she was or what she did. The story proceeds with remarkable acting by Tammy Blanchard. The voice modulations and facial expressions of 16 personalities was probably the most difficult role but she played it with ease. Through Dr. Wilbur’s psychoanalysis Sybil slowly came to terms with her personalities and the movie ends there. Shirley was an artist too in real life and lived as a recluse. After her death, nearly 103 paintings were found in her basement locked for about a quarter century. The style of many of these ‘Hidden Paintings’ were so different and presumably signed by her alternate personalities.

It can be said without doubt that Chris and Shirley were both very iconic cases in the psychiatric world. The psychiatrists who treated them dug deep into their traumatic childhoods. Most cases of DID take form when the child suffers physical or sexual abuse, or is exposed to very disturbing incidents that significantly scar their tender minds.

Each of the personalities manifest when the child’s psyche shatters unable to express the emotions they go through after witnessing such events.

The subject of mental disorders has long been a niche widely explored for thriller, horror and mystery movies with psychopaths, serial killers or perverts to evoke fear amongst the public. Very few of the movies speak about the suffering and trauma such disorders cause. These are two such movies that are deeply moving, increasing tolerance and awareness towards the mentally disturbed.

My Rating for both movies – 4/5 stars