― Samuel Taylor Coleridge, The Rime of the Ancient Mariner 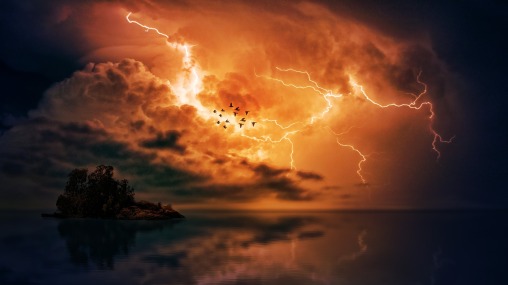 The Rime of the Ancient mariner is the longest literary work of Coleridge.  Every verse in this lyrical ballad is beautiful for its transparency and the simple and strong message it carries – to be mindful of Nature’s creations.

An old and frail mariner who has survived a shipwreck is at a wedding, desperately hoping someone would hear his story- his story of supernatural events that he shares with wide fearful eyes that have seen more than he can bear.  He implores a wedding guest to hear his story and he does so, as a three year old child would.

His story begins merrily as the ship sets off with the Sun shining brightly overhead, cheering them on to the sea. Soon enough a storm begins to rage and roar and the ship is driven by its tyrannous blast.  The ship is blown southwards into  snow and dismal fog. Just as all hope was fading away, much to the surprise of the mariners and his mates, an Albatross came out of nowhere bringing with it the warm glow of the sun once again.

The mariner, blinded by the irrational and self defeating nature of mankind killed the bird, for no good reason! This is the crucial part of the ballad. He was cursed by his shipmates for killing the bird of good omen, for now the cold wind blew again and the mariner along with his shipmates are drenched in the storm, but don’t have even a drop of water to drink.  The dead Albatross was hung around his neck to remind him of his mistake.

The ship seemed like it was cursed and piloted by two spirits- Life and Life-In-Death. The mariner is the only one who doesn’t die, but he hears whispers from the lost spirits telling him that he still has his penance to pay. Even after he is rescued, he feels a terrible pain, the need to tell his story; a story of remorse and perhaps a warning to the people he meets. Every time he narrates the story, he leaves a wiser man, but still engulfed by grief.

If you look at this poem from a spiritual perspective, you will see how Coleridge talks about the sanctity of life. The Albatross here is Nature’s bounty- a symbol of the natural gifts we have been blessed with. The death of which results in utter chaos to the order of life.

This poem dated 1798 still voices today’s reality. Aren’t we facing more natural disasters in the present time? Have we ever stopped to wonder why. How are we treating the environment we live in, the soil we came from and will eventually go back to? Our ignorance has led to many disasters such as the Assam floods  that have taken several hundred lives and injured crores. Assam is sinking because we humans chose to kill the Albatross and we have several mariners struggling to survive in the dark, cold world that is left behind.

The twist in the event is that, we can become the dove with the olive leaf and bring a smile once again on the faces of children, and lost families. We cannot comprehend the totality of nature, but we can learn to live in harmony with it and be the salve the hurting souls of Assam need.

“Look deep into nature and you will understand everything better. – Albert Einstein”

This post is part of the #CauseAChatter Campaign by Blogchatter.